The Castelbarco Mausoleum is a sepulchral monument erected in memory of Antonietta Castelbarco born Litta Visconti Arese.
The works for the construction of the building began in 1856, based on a design by the engineer architect Luigi Robecchi, and ended in 1865.
The building, in perfect neo-classical style, is made of gray and pink Baveno granite, worked on site and transported to the mainland by means of barges.
The polygonal plan is covered by a dome resting on a high tambour.
The main entrance is accessed via a short staircase that leads to a pronaos with four columns, surmounted by a tympanum and a massive oak portal decorated with two bronze knockers depicting a snake.
On the opposite side of the building there is a short staircase that leads to a flat space from where a flight of steps begins, flanked by centuries-old plants of Chamaecyparis lawsonia, which descend to the lake and offer a scenic and scenic glimpse.
The interior of the mausoleum consists of two superimposed chapels. The upper chapel, surmounted by a dome internally decorated with coffered sloping upwards in perspective form, is illuminated by four windows with railings. At the entrance there is the altar placed in a room that includes the apse. On the right side of the altar there is a sacristy room, while on the left side a staircase leads to the lower chapel. The latter, used as a burial ground, has exactly the same perimeter line as the upper one.
The large gray granite sarcophagus located at the upper altar contains the remains of Antonietta Castelbarco, which were moved here definitively in 1864 after the body was provisionally buried in the Ispra cemetery on October 7, 1855. The tombstone placed on the tomb was subsequently walled up to the foot of the staircase leading to the crypt.
In front of the tomb of Antonietta Castelbarco is the sarcophagus of her husband Carlo Castelbarco Visconti Simonetta, who died on 14 October 1880.
The Castelbarco Mausoleum, including the surrounding green area and the tree-lined avenue, was deemed worthy of protection and subjected to direct constraint by Decree of the Ministry for Cultural and Environmental Heritage on 3 September 1984. 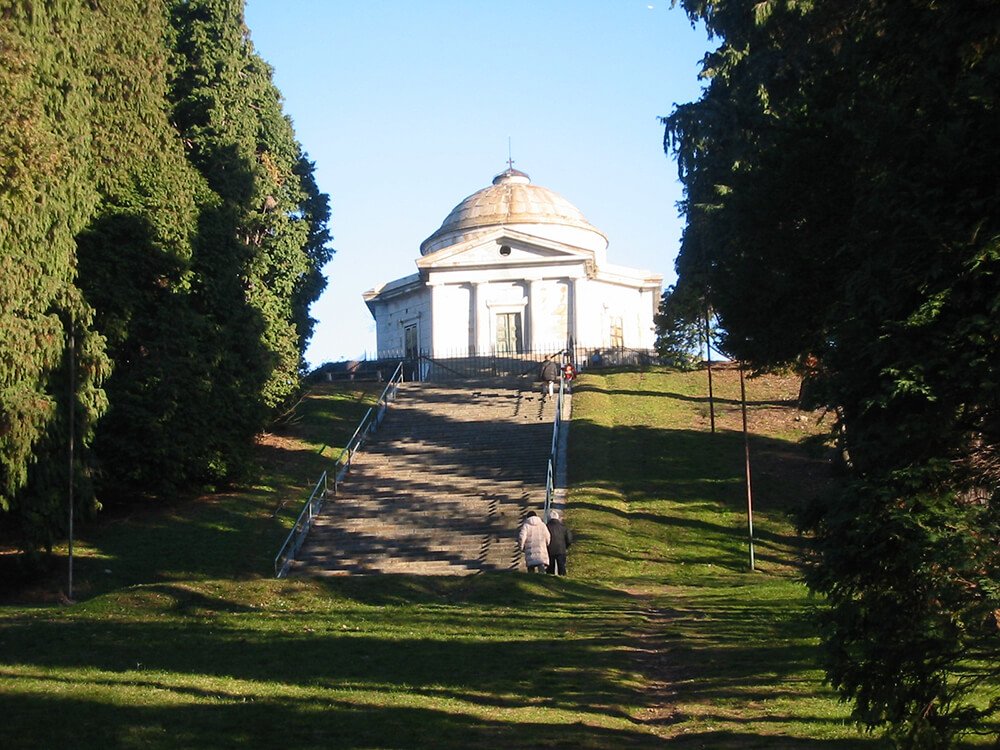 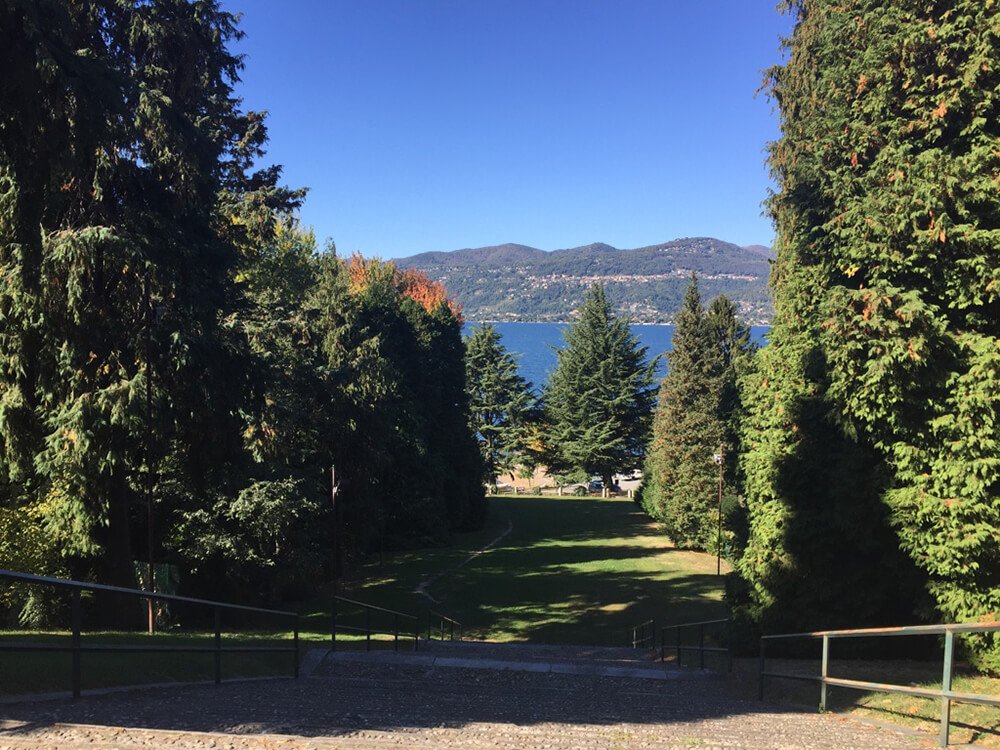 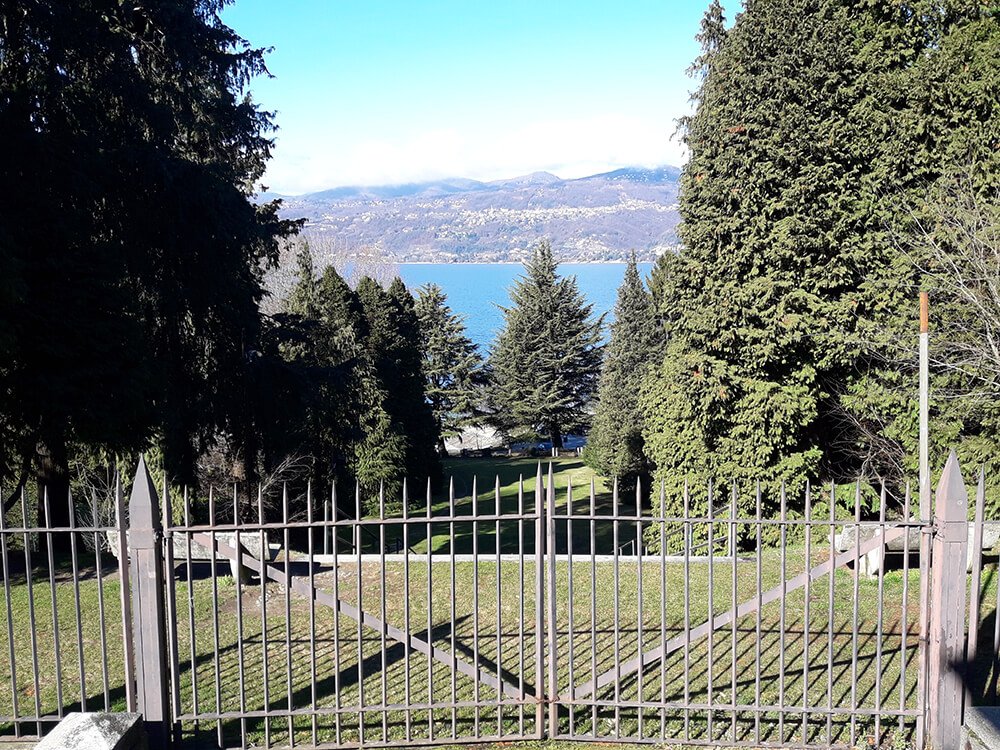 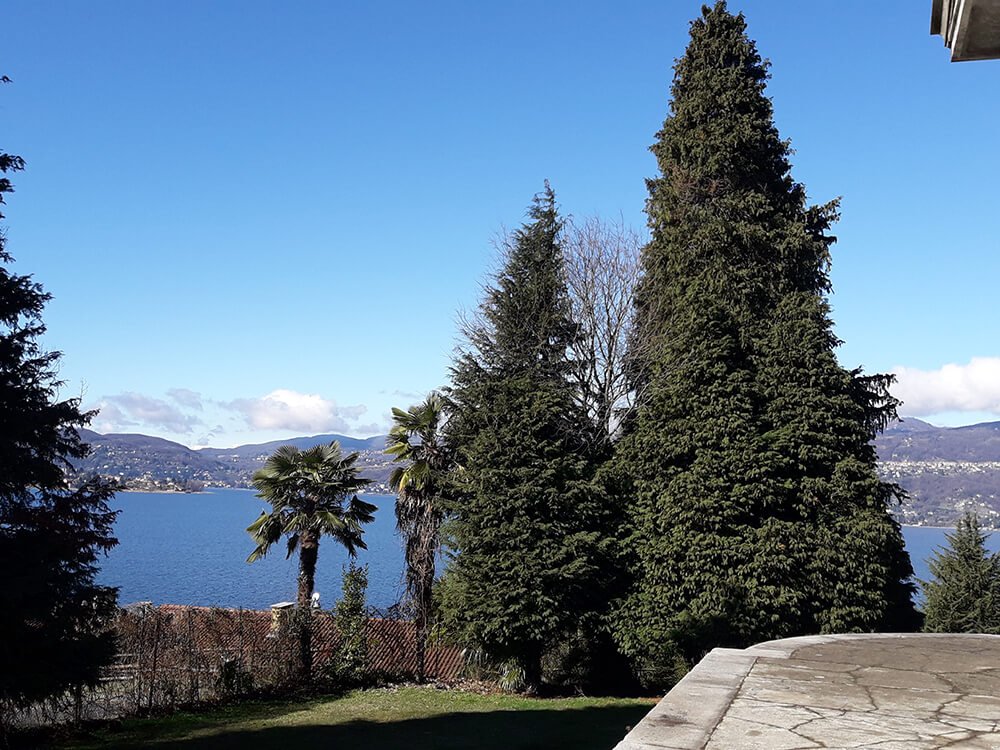 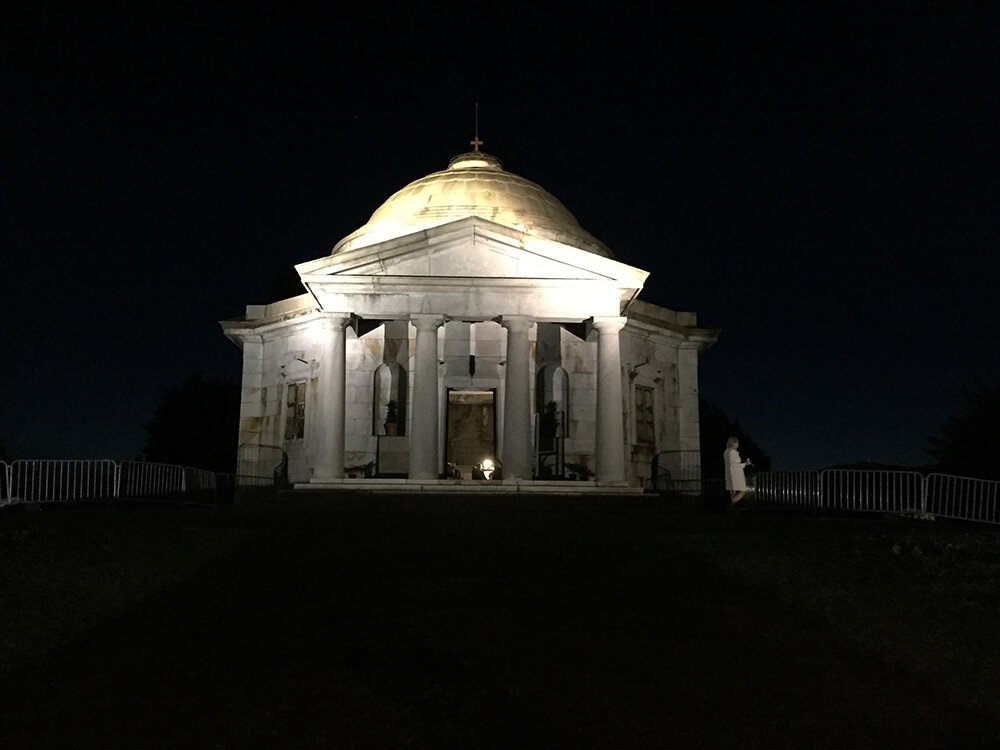 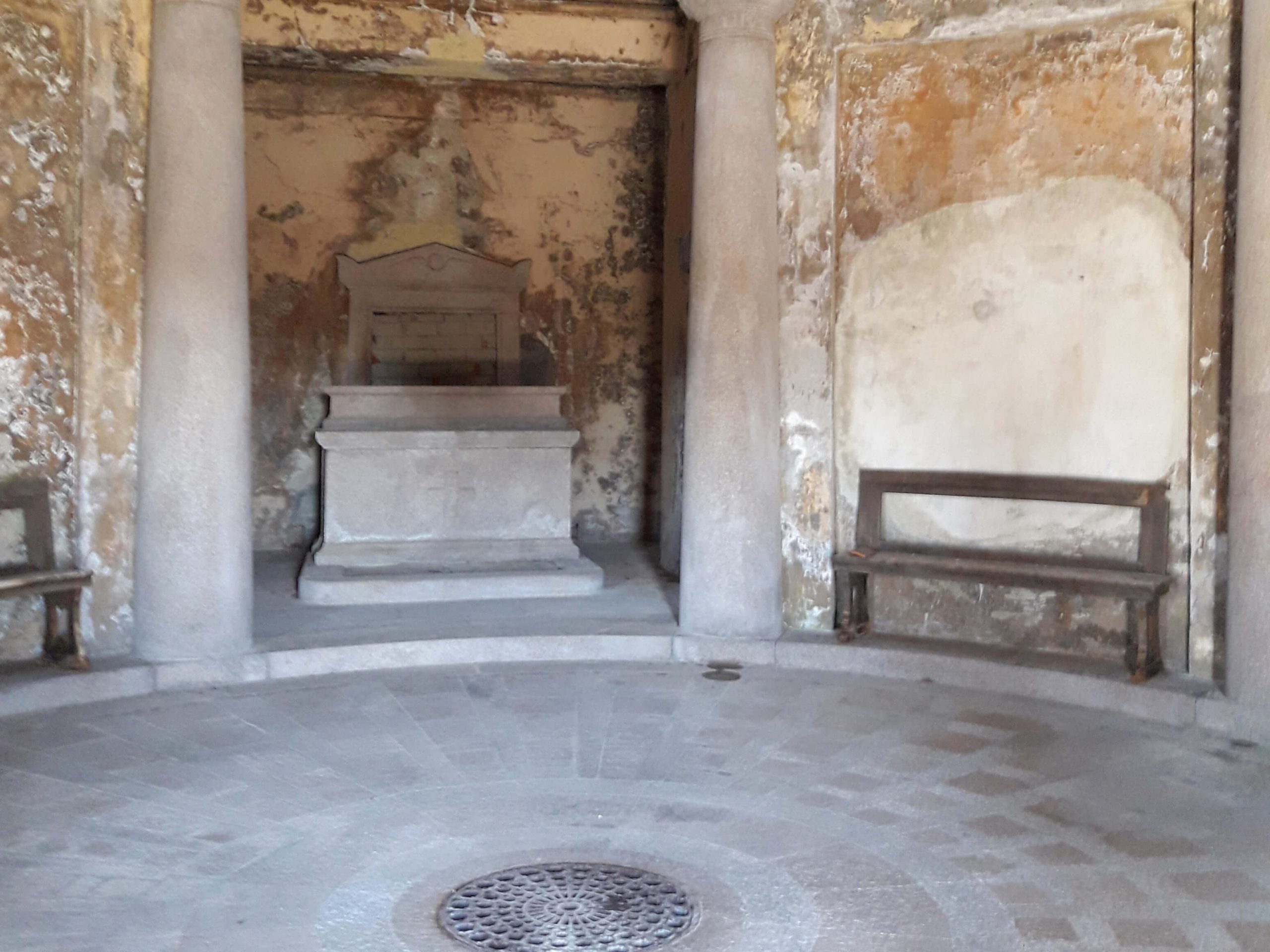 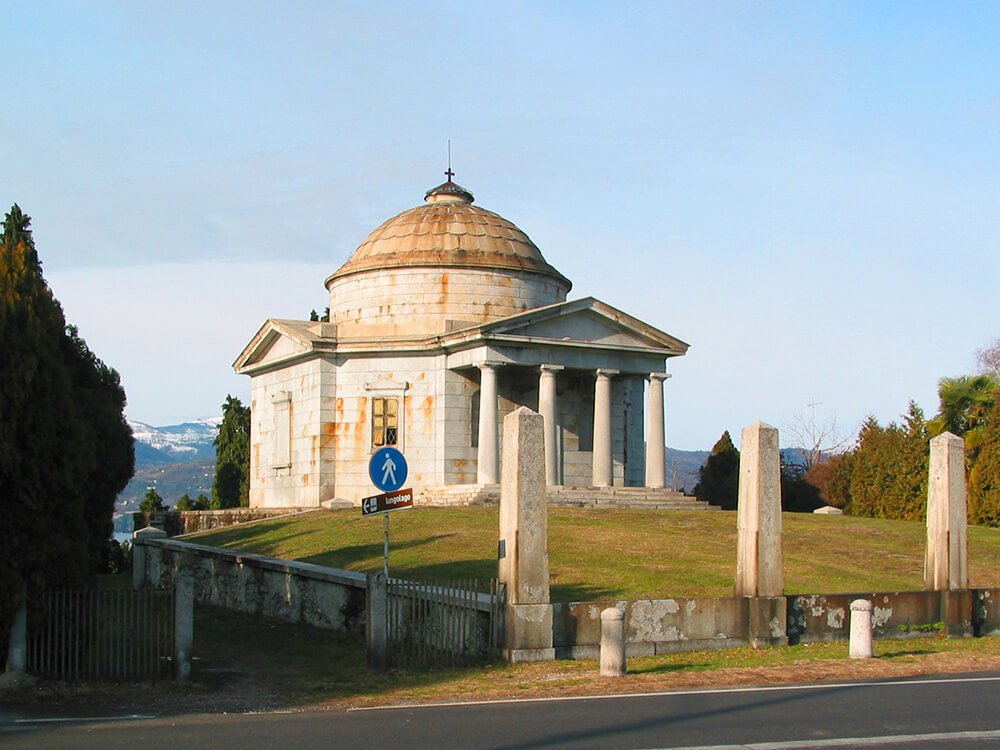 At the top of the hill called Monte del Prete, a short distance from the town center, we currently find an accommodation facility, but in this point in ancient times the Castle of San Cristoforo was located, already in ruins at the time of the pastoral visits of San Carlo in the second half of Five hundred.
It was a modest structure, built with the type of enclosed castles intended to meet, in medieval times, the defensive needs of a small community with frequent raids at that time. The panoramic position over the entire central basin of the lake and the visible connection to other castles suggests its inclusion in a system of fortifications in the area.
Today the remains of part of the perimeter wall, the entrance tower and a cistern are visible. 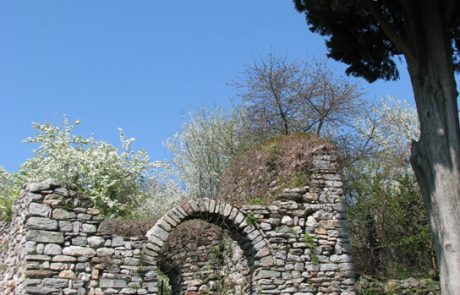 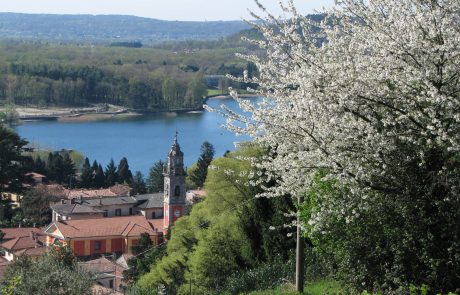 On the highest part of the promontory of the tip, you can visit the ruins of another medieval structure of some importance. These are the remains of the Church of San Crescenzo of which the basic layout of a large classroom and a sturdy wall that overlooks the underlying limestone quarry and the view of the lake can still be clearly seen.